A publication has been shared on Facebook that states that the National Electoral Council (CNE) will request reports on the spending of the candidates on social networks and that so far they have already spent $ 350,000. The CNE will monitor and control this type of electoral spending, but the aforementioned figure is unverifiable, since at the moment there is no public record of the advertising spending of the candidates on all social networks. Only Facebook allows these data to be known. 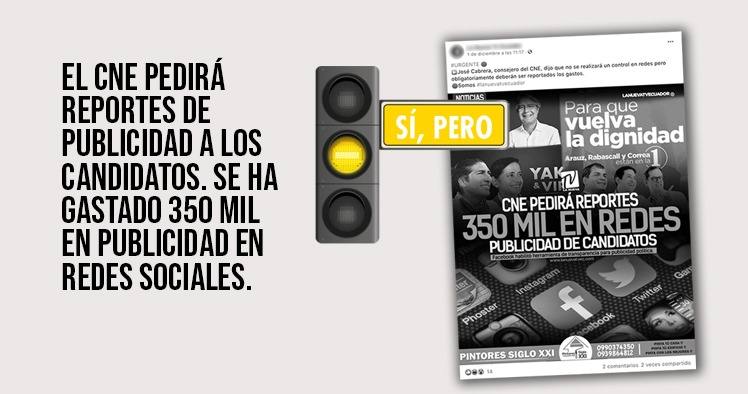 The National Electoral Council approved on November 27, 2020 the regulations for the control of electoral propaganda and advertising and reported that it will request reports on the spending that each candidate has on social networks. The regulations establish four control phases, which are: pre-campaign, electoral campaign, electoral silence and suffrage day. The objective of this regulation is to guarantee in an equitable way electoral propaganda and publicity for the dissemination of government proposals, the organization maintains. In addition, it will be verified that the political parties respect the limits of allowed electoral spending.

Facebook enabled a tool that reports ad spending on social, political and electoral issues. In all these categories and without distinction of the advertiser, an investment of $ 525,395 is registered from August 4 to December 8 with a total of 11,187 ads.

When taking the expenditure made only from the official accounts of the presidential candidates from August 4 to November 30 – when the information went viral – an expense of $ 265,958 was recorded. While the last report, until December 8, indicates a total expense of $ 287,368. (I)