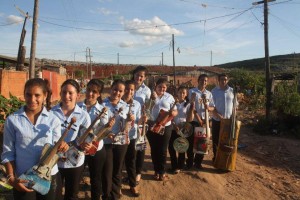 On the occasion of a project to help children whose parents work in landfills, this musical approach with recycled instruments has been created.

“They sound pretty good because our instruments are made of metal. Precisely we have an annoying-metallic timbre that matches perfectly,” stated to the Efe Agency, Thomas Lecourt, a 26 years old french saxophonist, who is a volunteer.

This social project began in 2006 as music lessons, and now it allows the children and young people who benefit from it to travel to several countries worldwide, and most recently, to be the opening act in the Metallica’s tour in South America.