A woman throws a shoe at Hillary Clinton, but she could dodge it 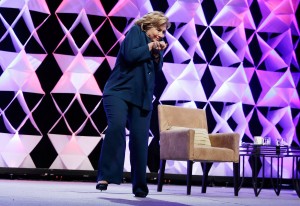 Hilary Rodham Clinton, former Secretary of State of the United States, next to the Apple co-founder, Steve Wozniak, were giving a lecture as guests of the Institute of Scrap Recycling Industries, at the Mandalay Bay hotel casino in Las Vegas, when a woman from the public lashed out strongly a shoe against her, who managed to dodge the object while it was on its way to her head.

`Luckily she did not play softball like I did,´said Hilary jokingly, who plans to run for president of the United States again. This episode recalls one happened in Baghdad, when an Iranian journalist threw his shoes at President George W. Bush in 2008.

Mickey Rooney leaves $ 18,000 legacy to a family in conflict