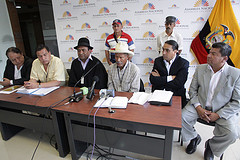 The Agrarian Network said that its rights of participation in the project management of the Land Law have been violated, that´s whythey accuse the Commission on Food Sovereignty of the Assembly.

For this reason, their representatives will appear before a judge to order two things. The first: nullify everything done by the commission in the processing of the Land Law, since July 2012, “for omitting citizen participation in the debate of bill born from the citizen initiative.” The second: reincorporate the representatives of Agrarian Network in discussions. And as that happens, they will ask the judge that “to immediately issue an interim measure aimed at stopping treatment of the bill.”