The Attorney General’s Office activated a second criminal case against the former Minister of Electricity, accused of allegedly receiving bribes from Odebrecht during the start of construction of the Toachi-Pilatón hydroelectric plant.

A report from the Comptroller’s Office supports this investigation. Meanwhile, the construction of the plant remains paralyzed due to legal issues with the companies that replaced the Brazilian firm in the development of the project. For three years, Alecksey Mosquera did not touch a single cent of the million dollars he received from Odebrecht.

He did so, according to the Attorney General, to deflect any suspicion against him. In 2008, the then Minister of Electricity received the payment from the Brazilian construction company, which currently became two criminal proceedings against him. In his defense, Mosquera argued that this money was for a consultancy that provided the company. But the prosecution said he does not tell the truth, because the Odebrecht payments came after Hidrotoapi (a public company created by the Provincial Council of Pichincha) gave Odebrecht the first disbursements for the Toachi-Pilatón hydroelectric plant: one of the mega-jobs announced by the previous government that still does not work.

The accusation against the former official (for money laundering) is based on the fact that Hidrotoapi received the money from the Ecuadorian Investment Fund in the Energy and Hydrocarbons Sectors (Feiseh). In 2008, Mosquera was a senior member of the committee that coordinated the management of the fund.

In that same year, Fernando Bessa, former Business Director of Odebrecht in Ecuador, contacted Mosquera to speed up payments. According to his version (which is part of the tax file) the former minister asked for $ 1 million for his management of that work. This coincides with the historical review of Hidrotoapi, which states that the contract with Odebrecht was signed in December 2007 and that in January 2008 work began. A few months later (in April) Mosquera received the first of three payments to the account of the Tokyo Trader company in the BPA of Andorra.

According to the Prosecutor’s Office, the account and the company were alibis to avoid international justice. In 2011, when everything was apparent calm, Mosquera began to move the money. He did it to Percy Trading, another paper company created in Panama that same year.

The Office of the Prosecutor held that between August 2011 to October 2014, from the Percy Trading account, 28 transfers abroad were made for $ 467,300 and 77,000 pounds sterling. The money went to Ecuador and to companies in the US and China. In addition, he used it to buy mechanical equipment and other items. Carlos Baca, principal of the Public Prosecutor’s Office, indicated that this contraption was used to leave no clues.

However, Odebrecht fell and its global network of bribes was exposed. Mosquera was the first public official to be detained in the country. His arrest was fulfilled in April 2017, after the testimony of Odebrecht’s external lawyer, Rodrigo Tacla Durán, who revealed that he knew of the payment of $ 1 million to the PEP (Politically Exposed Person) of Ecuador, Alecksey Mosquera, former Minister Of electricity.

Faced with this, former President Rafael Correa argued that said accusation had no relation to Odebrecht, that the payment was received in 2011 for a consultancy that facilitated the construction company. “A business between private,” he said. Distant from the words of the former president and with the evidence against him, Mosquera accepted the crime and apologized to the country.

The Criminal Chamber of the National Court of Justice will issue the sentence for money laundering. Pablo Guerrero, attorney for the former minister, asked the judges to consider the current penal code in 2008, which stipulated up to five years in prison for money laundering. The idea is not to be judged with the current criminal laws that establish a sentence of up to 13 years for that offense. According to Guerrero, the balance of justice must be in favor of the accused, for which reason the previous penal code for the trial must be considered.

The legal situation of Mosquera will not end with the case described. Just in the General Prosecutor’s Office an investigation was activated for alleged illicit enrichment. This file was born from a report of criminal responsibilities that the Comptroller’s Office issued last year.

For Franklin Arevalo, who served as defender of Antonio Mosquera S. (father of the former minister), the Prosecutor’s investigation should be extended because there are pieces that do not fit. One of the main ones is the function fulfilled by the three members of the Committee for the Investment Fund, which for 2008 was also made up of Fausto Ortiz, who was Minister of Economy and Galo Chiriboga, who was Minister of Mines and then Fiscal.

“Whoever asks and motions for the Hidrotoachi project to be financed by Feiseh is Galo Chiriboga, when he was Minister. He is the one who requested the

financing and it is stated in the minutes that the decisions are taken by a majority vote. If there are three members of this collegiate body, it is decided through two votes, “said the lawyer at the trial hearing.

Another ‘loose nail’ for Arévalo is to know why Rafael Correa issued a Decree to arrange for oil and energy projects to be made with money from the Fund. This decision, for the lawyer, changed the rules of the recruitment of Toachi-Pilatón, but the testimony of Correa never materialized. These questions have not been resolved and the sentence for Mosquera is approaching more and more.

The abandonment gains ground in the Toachi-Pilatón

The story of the Toachi-Pilatón hydroelectric plant is a tragedy. Ten years ago it started to be built, but today it looks abandoned. The turbines of the Sarapullo station, part of Toachi, are covered with plastics to protect them from dirt and dust.

The same happens with some installed equipment that is in the open. To take care of them, workers of the Electricity Corporation of Ecuador (Celec) try to maintain them even though they never started. Other machinery is still embedded  near the facilities of the “megaobra”.

In summary, today Toachi-Pilatón is a gray cement giant that was about to be born, but he did not succeed. Óscar Naranjo, Head of Equipment of the plant, confirmed to the Public Media that the progress of the work is 95%, of which, the physical work is almost completed, while electromechanics reached 85%. He indicated in case a new company signs the contract to finish the work, these works will last up to 20 months to have all the power generation of Toachi-Pilatón.

The electrical potential of the plant has been known since the 1960s, when electrical engineers toured the country to find the best places to install a clean and permanent power generation system. However, the project remained on paper for more than 30 years despite being only 100 km away Quito. In 1997, former President Fabián Alarcón issued the Decree to give the Provincial Council of Pichincha the power to carry out the project. That decision did not go much and was forgotten.

In 2005, the ex president Lucio Gutiérrez looked for another plan to specify the hydroelectric and withdrew the concession to the Pichincha Prefecture. That action brought him opposition from all the provincial councils of the country, finally it did not materialize either.

After the fall of Gutiérrez, his replacement, Alfredo Palacio, returned the project to the hands of the Prefecture, which decided to create a Public Limited Company to end the conflicts, but the work was postponed again.

The arrival of Rafael Correa to the Presidency gave him another push: the contract was signed with the then famous Brazilian company Odebrecht. Even, Correa himself was in the collation of the first stone in January 2008. By then it was announced that in four years will be working at all turbine and that would generate 254MW, a six percent of the national energy demand.

But at the end of that year Odebrecht was expelled from the country and the President ordered the termination of all contracts with the company. On January 27, 2009, Hidrotoapi broke the relationship with the Brazilian construction company with a Termination Agreement by Mutual Agreement. Odebrecht returned more than $ 98 million that it received as an advance to start the works. Money that supposedly was managed by the then minister Alecksey Mosquera.

And on the other hand he received $ 6 million for the work he accomplished. Two years later, to achieve the goal, Hidrotoapi signed two contracts for $ 588 million. The first, with the Chinese company Water & Electric, for civil works; the second, with the Russian company Inter Rao UES, for hydromechanical works, but this firm left after declaring the unilateral termination of the contract. Currently the work is in the hands of the Electricity Corporation, which delivered to a Business Unit of the same institution the management of the megaproject. This entity, in its latest rendering of accounts, mentioned that its goal is to become in 2021 a national benchmark in the provision of clean energy, as planned in the last century. 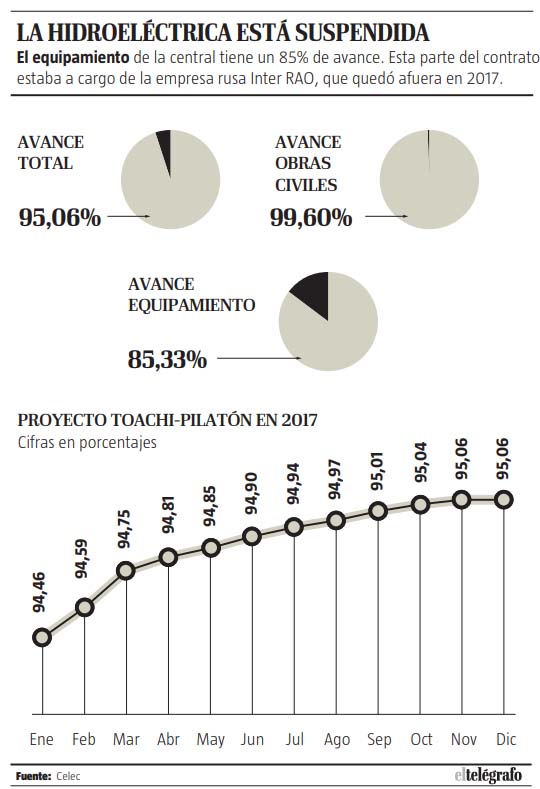 Another case of Mosquera. The former Minister of Electricity, Alecksey Mosquera, was declared innocent in a trial because he allegedly entered the prohibited articles to the social rehabilitation center, where he has been detained since April 2017.

10 years in prison is the maximum sentence that the law establishes for the illicit enrichment.

The amount is under debate. Mosquera’s defense never accepted the amount of money that the Prosecutor’s Office refers to in its accusation. He assures that it was a smaller amount and that he does not consider the legal gains either. (I)