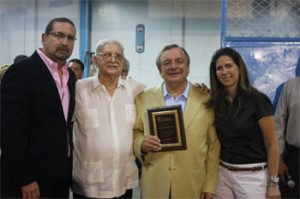 Abogado Alvaro Noboa received on December 30 a plaque recognizing his 15 years of work at Industrial Molinera. The event was held at the company locations and his words of gratitude were:

“First, I want to thank Industrial Molinera for the plaque that you are giving me, which represents my fifteen years that I have been working with this company. And I want to say that despite having only 15 years in this business, I know it from the begining. At least 50 years have passed since my father began to make the structure and the plans, this was a spectacular project for my father. I have seen him making much larger businesses in his life, but none caused as much excitement as this company, so much that his head office is in the building of Industrial Molinera, as well as mine, and although it is not the only company where I work or I founded, -because I founded Banco de Litoral, Financiera Global, Promandato Global-however Industrial Molinera and you all hold a special place in my heart.
Thank you very much, Merry Christmas, and Happy New Year to you all.

Irak, Pakistan, and Mexico are the Most Dangerous for Journalists