Armed Forces will reduce imports of equipment this year 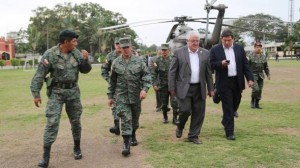 The Armed Forces indicated they will restrict the purchase of equipment involving imports.

The budget provisions for 2015 exceeds $ 207 million; of which $ 54’777.655 (the highest number) will be used for the housing construction for military personnel with family and the restoration of the already existing, outlines a plan prepared by the Ministry of Defence.

“Everything that is (elaborated) with imported components will be reduced to the limit and local investments will be prioritized. With President Rafael Correa we took the decision to prioritize housing, which requires a few imported components, ie, almost everything can be done with Ecuadorian labor and all the money stays here,” said the Defense Minister, Fernando Cordero.

Within the regime is being planned to use parts produced or assembled in the country to prevent imports of military equipment.

Parliamentarians meet in Quito to discuss security and cyber espionage