Biden seeks to “rebuild confidence” with his visit to Brazil 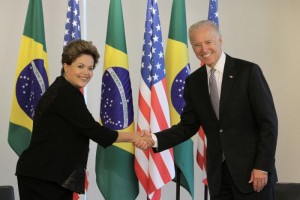 The U.S. Vice President, Joe Biden, said that after allegations of espionage, the government seeks to “rebuild confidence” with Brazil, a country he visits this Monday for the debut of the U.S. soccer team in the World Cup.

In an interview with the daily Folha published on Monday, Biden said that his trip to Brazil, “reflects the importance we give to the bilateral relationship,” so he want to try these ties “face to face” with the Brazilian government, when he meets on Tesday with President Dilma Rousseff and Vice President Michel Fear in Brasilia.

“We recognize that unauthorized programs about U.S. intelligence revelations raised concerns in governments around the world, including the Brazilian government and its people,” he said.

Biden insisted that he and “President Obama are committed to advance the bilateral relationship with Brazil.”