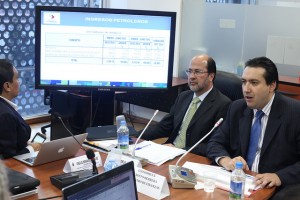 The Finance Minister Fausto Herrera, between today and tomorrow will deliver the 2015 budgetary assignments to the National Assembly. The deadline is November 1.

Oswaldo Larriva, President of the Committee on Economic Conditions, confirmed yesterday that the Minister had informed him that it would be submitted on Friday night or early Saturday.

Larriva said that the commission prepared a schedule for the review and approval of a report to be discussed in the plenary.

So far it is known that the estimated oil price for the estimated budget goes between $ 80 and $ 84 per barrel, less than the amount budgeted in 2014.

The Senplades also announced that the Annual Investment Plan for 2015 will be of $ 8.435 million.