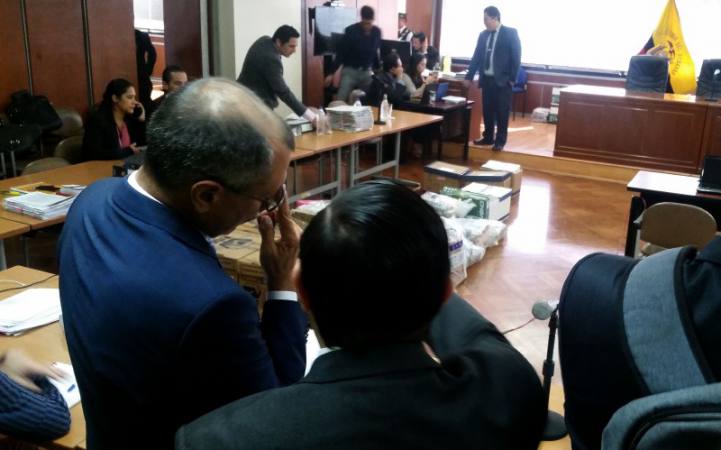 On Thursday, Carlos Baca was asked to link former President Rafael Correa and the construction company Odebrecht to the preliminary investigation 70-2017 for the crime of bribery, related to Odebrecht corruption. The request was made by César Montúfar.

This ex assemblyman, who is the private accuser of Vice President Jorge Glas in the process of illicit association, says in his request that Correa, being president of Ecuador, “reiteratively and continuously” appointed Glas in charge of the strategic sectors. According to him, there is an express will of Correa so that Glas “is the person who invariably controls and decides everything related” to those sectors.

And he also asked that a judge urgently issue a ban on leaving the country.

While on the seventh day of the hearing for alleged illicit association, Diego Vallejo, who worked in the Transparency Secretariat, gave his testimony through a video conference from the USA. He said that an investigation into a trip to China that Ricardo Rivera would have made in 2010 without being a public official was initiated. That the invitation for that trip was made to then Minister of Strategic Sectors Jorge Glas. Rivera acknowledged that he traveled to China but that it was a private trip.

According to Vallejo, the investigation does not conclude because whom direct that secretariat, Juan Roldán, and Edwin Jarrín, current member of the Council of Citizen Participation left.

He added that he delivered that documentation to an adviser of former president Correa and to other people, but the investigation did not continue.

In another of the Odebrecht cases, the State Prosecutor’s Office filed a private accusation against former Comptroller Carlos Pólit and his son Jhon Pólit in the court proceedings. This a few days after the close of the fiscal instruction of 120 days that is being followed against the Politics, Estéfano Isaías and Mauricio Neme. (I)