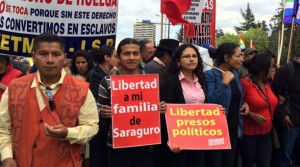 Leaders of the CONAIE, from the table of Justice, defended the social protests against the regime of President Rafael Correa, stressing they make it “framed on the right to resistance, participation, organization and free expression.”

Amid tears, Katy Betancourt asked the government to stop the violence against indigenous people. “What is happening in the country is an ethnocide, because the most attacked (in the latest protests) were the indigenous peoples. We want to say enough to these violations and we say the president (Rafael Correa) that this is not your hacienda because we have fought to change the country. We will not allow that indigenous women are threaten with rape,” he complained.

The Board of Justice issued a statement in which “they repudiate the repression and violence of the State expressed in different ways against protesters and especially against women.”

Report shows the status of the beneficiaries of the BDH