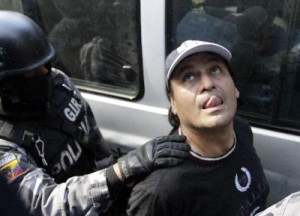 Fgueroa was arrested yesterday around 14:00 in the north of Quito. “All I have to say is that justice is used this, to imprison honest people,” said the former Secretary of the Medical Federation. He noted that he was in Quito “because my mother is sick, with terminal cancer and I had to come to see her.”

Milton Castillo, defender of the doctor, said he will try to get the freedom of his client with a habeas corpus. According to the defense, there are some precautionary measures issued by the Inter-American Commission on Human Rights, “which should be observed”.

Figueroa was also ordered to pay $ 140,000 to President Rafael Correa along with former asemblyman Cléver Jimenez and his advisor Fernando Villavicencio, who were sentenced to 18 months in prison. After the refusal of the appeal, the three were received into Sarayaku territory.

CNE prepares amendments to the Code of Democracy