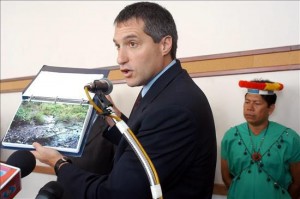 The Lawyer Steven Donziger, one of the representatives of Ecuadorians that demanded Chevron for environmental damage in Ecuador, appealed the ruling of the U.S. Justice according to which a judge of Ecuador would have conspired for conviction against the oil company. In a letter released yesterday, Donziger accused Lewis Kaplan, Manhattan federal judge who ruled in favor of the company last March 4, for making mistakes by accepting the testimony of corrupt witnesses, ignoring scientific evidence and”illegally” interfere with the final decision of the Supreme Court of another nation.

According to Donziger, Kaplan resolution in favor of Chevron and against the plaintiffs to receive the money contains “numerous errors” and violates “clear precedents” of American Justice.