DP World, in the eye of a great hurricane 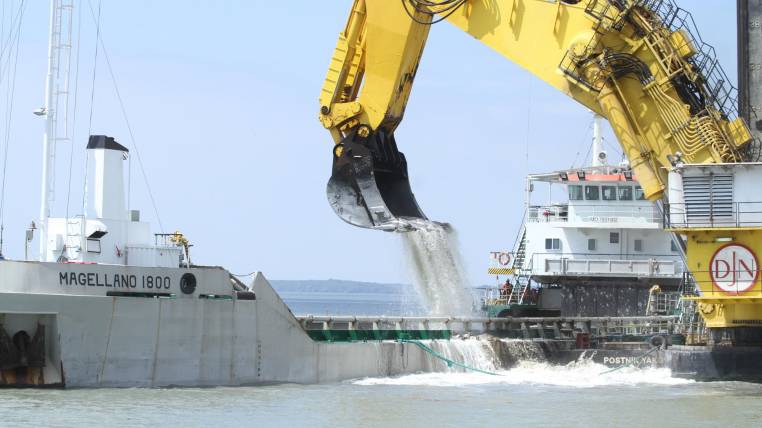 A new front was opened between DP World Posorja and the companies that will be its competitors for the cargo. The company of dubaiti origin, which was delegated the competence to build and manage the deepwater port of Posorja, is accused of circulating a “comparative analysis” among the companies interested in the Public Competition for the Dredging of the Access Channel to the Maritime and Fluvial Port of Guayaquil. Analysis that “misinforms potential bidders”.

The warning comes from a 10-page document, which EXPRESO had access to, questioned by both the Maritime Chamber of Ecuador (Camae) and the Association of Port Terminals (Asotep), which was also echoed by Mayor Jaime Nebot, that drives dredging to 11 meters at low tide, which will be paid by users and will allow the arrival at Fertisa, Guasmo, Trinitaria, Domingo Comín terminals, via the coast, of post panamax vessels.

DPW, from the middle of next year, will be another competitor, when it finishes stage one of its project in Posorja. The company builds its own maritime channel.

According to the presidents of the Camae and of Asotep, Javier Moreira and Sergio Murillo, with two weeks to submit the offers by the dredging companies to operate, deepen and maintain the maritime channel to the ports of Guayaquil, “DPW has demonstrated fear of competition”, initiating a campaign of” disinformation with the clear intention of reducing the participation of international companies that are prepared to intervene in said contest “.

The mayor delivered the official letter sent by the guilds to the Municipal Technical Commission that carries out the Public-Private Partnership so that it in turn sends it to the companies that have been interested in dredging. This document ratifies the economic viability of the dredging project authorized by the national government. 84% of non-oil imports are made through the port system of Guayaquil (Contecon and the private ones): 1.87 million containers and more than 17 million metric tons in 2017.

The supposed comparative analysis “does not match or correspond to the reality of the operational performance of Guayaquil’s port terminals, their current and future infrastructures and investments, with which they intend to reduce the operational capacity” of the city. With this, they say, DP World seeks to generate doubts about the commercial, operational and environmental viability of the project.

According to Moreira, the shipping lines of international traffic, whose ships transit through the access channel to the maritime and fluvial terminals, rely on the execution of the dredging. “DP World must not oppose the existence and competition of current ports.”

DP World told EXPRESO that it circulated the letter because it believes that “there is a financially viable solution that would guarantee that both projects can be successful. Even the last page of the presentation concludes with a proposed structure for that cooperation. ” And it also proposes that the external channel “that is already being executed by us” be used for the transit to the internal ports of Guayaquil.

Appointment for the containers

The commission created by Mayor Jaime Nebot to find a solution to the conflict between shippers and exporters for the collection of up to $ 50 per container from the yards, meets today at 15:30 in the Chamber of Industries.

There will be explained several things, among them, the “benefits” of what is coming: a programmed dispatch system that “will save costs”, since it will be possible to plan the removal of the containers.

The Commission in charge of the executive president of Fedexpor, Daniel Legarda, will also know the advance dispatch system of TPG (Port Terminal of Guayaquil). In the meeting with the mayor, on Tuesday, the sectors approved to review the value that is charged, after an ordinance will force them, 15 days ago, to work 24 hours a day, 7 days a week. “They agreed that this has a cost,” said directors. Banana growers believe that it is the shipping companies and not they who should assume that cost. (I)