Ecuador Sub-17, Once Again in the World Cup 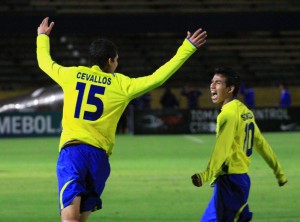 Sadly Junior Sornoza was injured during the minute 67 of the match. While the Argentinean couch, Oscar Garre, watched in awe the superiority of the Ecuadorian team. Soon the player Jose Francisco Cevallos scored the first goal, while Luis Batioja added the second point. However the goal made by the Argentinean Federico Andrada, made the Ecuadorian fans nervous.