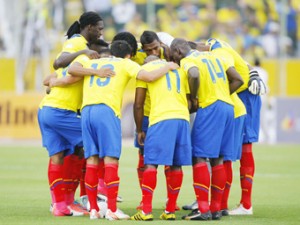 It didn’t matter that Ecuador lost  2-1 against Chile, in the last date of the preliminary rounds, the fans celebrated the classification of the tricolour team for the third time  to the World Cup.

The maximum celebration occurred after the minute 65  when Felipe Caicedo scored the goal which slowed down  Chile and appeased the feeling that one more goal could send Ecuador to the playoffs,  as long as Uruguay scored two more goals, since it won 3-2 and needed to have a three goal difference over Argentina.

The national goal arrived thanks to the help of winger, Antonio Valencia, who starred in a spectacular run from its own field and opened for the arrival of Caicedo.

After the 2-1 result, both teams lowered the intensity of the game, while  the euphoria of the Chilean public emerged and several hundreds of Ecuadorian fans at the National Stadium.

The tricolour became alive and animated with the final whistle  who returns to the World Cup after their double participation in Korea-Japan 2002 and Germany 2006.

The arms of the players were raised to heaven to thank Christian “chucho” Benítez, player number 11, who died last July in Qatar.

The U-17 World Cup started today in the UAE