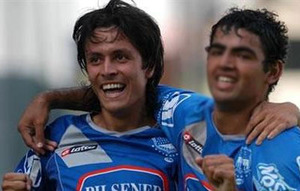 After a year marked by wins and losses for some popular teams like Club Sport Emelec and Barcelona Sporting Club, some sports clubs seek to strengthen and upgrade their teams.

After the hiring of Carlos Ischia as coach for one year, the yellow directive seeks to fulfill its national team with national reinforcements. Its candidate is the Ecuadorian Christian Suarez, who previously played for the Mexican club Necaxa and Santos Laguna. In Ecuador he played for Olmedo, Deportivo Azogues and El Nacional. Another candidate is the frontliner of Guayaquil Ely Jair Estrella, who left the Mexican team Santos Laguna.

While the Argentinean Luis Miguel Escalada, who played in Manta and is arranging with Emelec, began the process of nationalization so in 2014 he can register in the Ecuadorian Soccer Federation as a tricolor player. Millionaires expect the naturalization process of Escalada to be defined by the end of January.

Meanwhile, the Santa Fe of Colombia signed Ecuadorian midfielder Edison Mendez for another season. His status as a player is on loan with an option to buy him, as reported by the club president Cesar Pastrana. “I come with great expectations because I’ve made most of my career out of my country, it is a great challenge not only for me but also for my family,” said Mendez after signing his contract.

The player Jaime Ayovi ended his contract with Liga de Quito and now leaves the team despite having a six month contract. The Esmeraldas player revealed that he already has some offers from abroad, but did not gave details, he discarded to sign with any clubs in the Middle East.

Liga de Loja seeks to strengthen its team after the request by their coach Alex Aguinaga, who today traveled to Mexico with the tranquility of being renewed for one more year with Liga de Loja. Jimmy Villavicencio, public relations officer of the Loja club told newspaper El Universo that after renewing Aguinaga, 80% of the team was endorsed by the TD, among those foreigners are Oscar Ayala (Paraguay) and Jimmy Bermudez (Colombia). He also called for five national and two international players.

Other clubs also began hiring because the championship will begin in January 2014 to accommodate their schedules with the world cup of Brazil to be carried out between June and July of next year.

Assembly introduces a new style for Christmas in Ecuador