Ecuadorian takes refuge in a church to avoid deportation 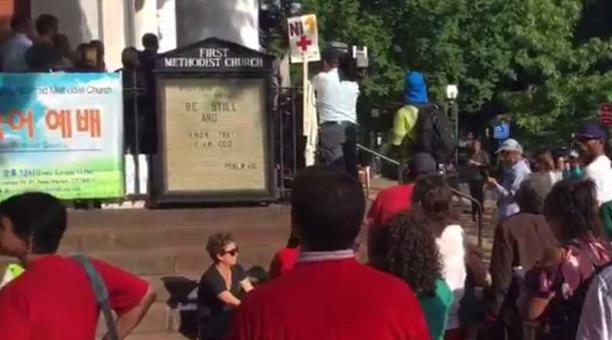 Churches in the United States are becoming shelters for undocumented immigrants who try to avoid deportation. This is the case of Ecuadorian Marco Antonio Reyes Alvarez, who entered a church in New Haven. Reyes is the second immigrant who resists deportation by taking refuge in a shrine. Last month, a Guatemalan woman did the same when she entered a Pentecostal temple. The immigration authorities agreed to analyze her case following this action.

Reyes, who lives in Meriden (Connecticut), had to take yesterday, August 8, 2017, a plane that would bring him to Ecuador. But instead of appearing at the airport, he entered the Methodist church First & Summerfield United. His entry to the United States was ‘legal’ in 1997. He has been in the United States for 20 years and has three children.

Immediately, relatives, civil organizations and even politicians came to the church to show their support for Reyes. Besides, they explained that a family member was recently killed and that they fear for his life if he returns to the country. (I)