FARC dissidents would store weapons on the Ecuadorian border

So far in 2022, the Armed Forces (AF) have seized nearly 5,000 weapons and ammunition in the border areas of Esmeraldas and Sucumbíos with Colombia. 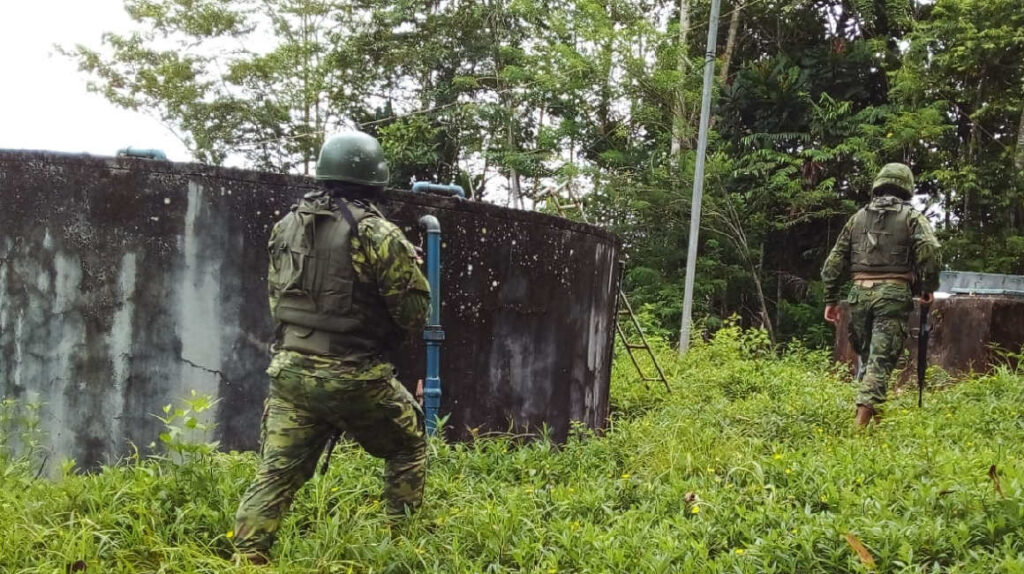 Members of the Ecuadorian Armed Forces carry out patrols on the northern border, on September 1, 2022.

The Armed Forces intensified their operations on the Ecuadorian border with Colombia, from September 1, 2022.

The decision was made after, on the Colombian side, there were armed clashes between the Army of that country and members of armed groups, dissidents of the Revolutionary Armed Forces of Colombia (FARC).

The objective of the military movements in that area is to prevent dissidents from crossing into Ecuadorian territory.

InSight Crime, a portal dedicated to investigations into organized crime and citizen security in the Americas, reported on October 14, 2022 that the Ecuadorian border area is ” the arsenal” of the FARC dissidents.

According to the publication, ex-FARC groups have taken control of the territory in southern Colombia and have managed to maintain the trend of using Ecuador as a storage center for their weapons and other logistics devices.

For example, the analysis mentions the  Comandos de la Frontera, the most powerful dissidence of the FARC in the department of Putumayo, in southern Colombia. In September 2020, the Ecuadorian militia dismantled a camp where pamphlets from that group were found in Sucumbíos.

The analysis carried out by InSight Crime coincides with official reports from the Armed Forces.

So far in 2022, the Armed Forces have seized 4,844 weapons, ammunition and explosives in Esmeraldas and Sucumbíos in 82 operations.

Most of the seizures were made during military patrols in the jungle areas of the northern border. For example, on January 20, 2022, the Armed Forces located a rest area for these groups, where there were weapons and ammunition. As well as other logistic elements.

The most recent discovery is about 760 mines located in Sucumbíos, on October 6. This happened in Lago Agrio, a canton adjoining the Colombian border.

The Armed Forces reported that the explosives were owned by the ex-FARC , which usually set up their camps in Ecuador.

Six dissidences on the border

Ecuador is going through the worst security crisis in its history. The Government attributes it, above all, to the growth of drug trafficking.

This criminal economy has gained strength, in part, due to the presence of FARC dissidents on the northern border and their association with international cartels and local drug gangs.

According to the authorities, at least six FARC dissident groups operate in that area :

These groups would be entering Ecuador with the ‘authorization’ of the local gangs, which provide them with security, in exchange for the drug entering the country, which is then transported to the ports in Guayas, Manabí and Santa Elena for export.

In Esmeraldas, for example, Los Lobos, Los Tiguerones and Los Chone Killers would be operating, which are the armed arms of the Jalisco New Generation Cartel. And that they receive shipments of cocaine from the Oliver Sinisterra Front and the Urías Rendón Mobile Column.

And in Sucumbíos something similar happens. The group close to the Sinaloa Cartel, made up of Los Choneros, Los Águilas and Los Gangsters, would be working with Comandos de la Frontera.

This complicated scenario intersects with the so-called total peace plan, proposed by Gustavo Petro, president of Colombia. The president has offered negotiated peace agreements to more than two dozen criminal groups, including the Border Commandos and other dissidents.

Ecuador lifts restrictions due to covid-19

Ecuador reacts to the elimination of tourist visa for Colombia