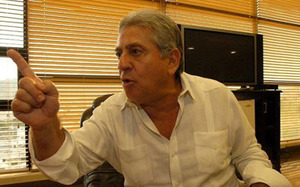 Luis Chiriboga Acosta, current president of the Ecuadorian Soccer Federation (FEF), predicted that for Congress 2014 Soccer Regular will present a project to monitor the expenditure of sports clubs during the season.

The holder FEF expressed his concern at the lack of liquidity of equipment to cover the salaries of the players, as the case Deportivo Quito and Barcelona, whose players have complained about the delay in wage payments. El Nacional and Deportivo Cuenca have also presented delays in payment of salaries and Liga de Quito they have already announced that it will reduce the salaries of their players for next year.

“We are not guilty, the same leaders recognize that they have exceeded in hiring players,” Chiriboga said in an interview with Radio Caravana.

Given this problem will present a “reform project that pretends that the clubs present the FEF their budget properly funded and act on accord to their budgets, as does the FEF.”

One of the articles of the text is that the presidents or legal representatives of the institutions “present a budget guarantee to cover when they do not meet the players.”

KLM will travel daily from Guayaquil to Amsterdam