Firefighters warn crisis and will seek a dialogue with President Correa 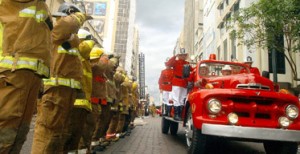 A legal reform in Ecuador, adopted on January 8 by the Legislature, modifies the tax charging system that benefits firefighters. For this reason, they  predict a financial crisis. They say they are mourning. They fear that citizens simply stop paying the contribution. “Aternatives of dialog with President Rafael Correa to find solutions will be sought,” wrote the delegation of Guayaquil on its Twitter account.

So far, the bills for electricity consumption included the tax for firefighters, as provided by the Fire Defense Law. But the new reform says that this tax “will be charged by electricity companies prior approved agreement by those; the respective value shall be collected through an independent bill which establishes the cost of electricity.”