First session of labor reforms will be held this Wednesday 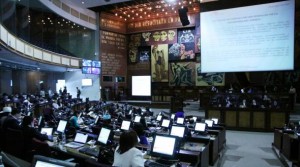 The President of the Commission on the Rights of Workers, Betty Carrillo (AP), reported that its members will be convened on Wednesday,November 26 for the first session, in which the labor reforms that were submitted on November 15 by the Executive will be addressed.

Carrillo indicated that in the meeting, a schedule will be established for the analysis of the sections, divided into five areas : right to stability, deepen the equity wage system modernization, democratization of labor representation and universalization of social security.

She also said that written communications have been sent to the eight trade union confederations, as well as the Labour Ecuadorian Parliament and the Networks of Human Resources, so they can send their observations and opinions.