Habeas data is denied to widow of Gabela 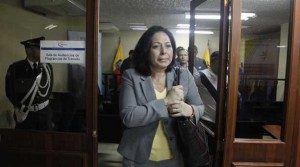 Due to the lack of prior notification to the Ministry of Justice, a transition court denied on February 24 a writ of habeas data access to know the report of the Interministerial Committee of the Executive branch on the death of Jorge Gabela, former commander of the Ecuadorian Air Force (FAE for its Spanish acronym).

The action was raised by the widow of Gabela, Patricia Ochoa, against this ministry to allow her to access the document that outlines the conclusions about the death of her husband in December 2010, who questioned the purchase of seven Dhruv helicopters for the FAE in December 2010, months prior to his death.

Sofia Granda, legal delegate of the State, requested the order to be filed because “it is information we do not have as a ministry,” she argued.

Moreover, the Attorney General´s office of the State clarified that the one who must deliver that report is President Rafael Correa, because theexecutive decree 1317 that creates this committee says so.