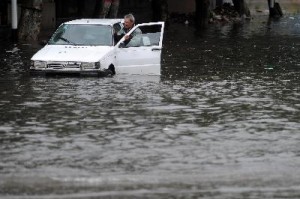 The intense storm of wind and rain that since Thursday affects the province of Buenos Aires left two dead, hundreds evacuated and streets flooded until yesterday.

More than 40 hours of rain without cessation caused that a 22 years old young man died at San Fernando electrocuted while trying to rescue his belongings of the flooded home, confirmed the Mayor.

In addition, this weekend, the corpse of a 14-year-old teenager, who was swept away by the floodwaters of the Luján River, located 75 km north of Buenos Aires, was rescued.

The red alert continues in Lujan because of the phenomenon known as sudestada.

In Buenos Aires and its suburbs streets remain flooded, there are blackouts and inconvenience in public transport services.

US attends to an ALBA meeting on Ebola