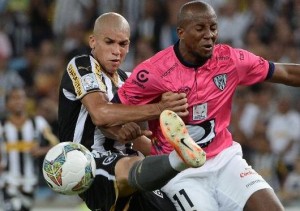 Botafogo Brazilian team recovered the step on the Libertadores Cup after beating as local 1-0 to Independiente del Valle.

A solitary goal from Juan Carlos Ferreyra gave the three points to Botafogo, which now looks cleaner panorama overlooking the aspirations of qualifying for the second round of the Copa Libertadores.

“The important thing is the victory,” said Ferreyra to the television, who misses next match due to accumulation of yellow cards. Gabriel neither will play on the next date for the same reason.

Independiente del Valle was a tough opponent for Brazilians and in several passages of the match came close to equalize the score but their strikers were not fine with the final touch.