The colors of the Mexican flag appear in videos, photos and flyers. The material circulates on social networks and today it is part of the investigations to identify mafias that try to position the message that they have the support of Mexican cartels to operate. 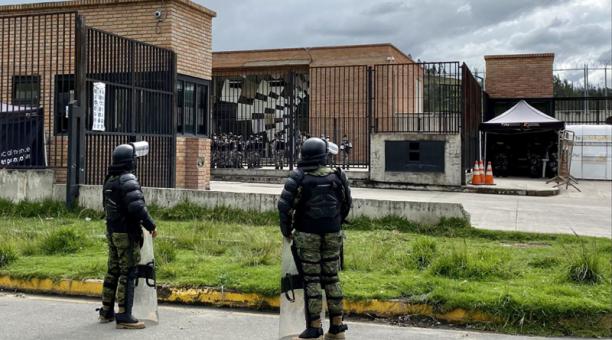 One of the recordings in the hands of the experts lasts one minute and six seconds. The tricolor green, white and red flames there . A hooded man holds her inside the Guayas Regional prison .

In another image, shared by WhatsApp, you see the same colors and there is talk of Sinaloa . On the other hand, in leaflets that were launched last week outside television stations, the name Nueva Generación appeared , alluding to the Jalisco Nueva Generación (JNG) drug trafficking cartel , headed by alias ‘El Mencho’ .

The agents also trace the symbols found on the drug seized in the country.

Now, everything is part of the files that were opened after the death of 79 prisoners inside the jails.

After the massacre, Los Choneros and factions that seek power within this network spread more images identifying themselves with the two mafias in Mexico . The personnel investigating these events spoke with this newspaper and say that there are indications of a reconfiguration of alliances between local and international gangs to gain control of drug routes in Ecuador .

Are the cartels in the country? The agents say no. In dozens of files opened by drug trafficking the word appears: emissaries . The Police identify with that name the members of Mexican mafias that arrive in the country to supervise the shipment of the alkaloid.

They also seek local support to carry out these transfers. The late Los Choneros chief , alias ‘ Rasquiña ‘, was singled out for providing security to the illegal shipments that belonged to Sinaloa .

Last year, the Police arrested a person linked to JNG in Manabí . In that same operation , baptized as Anniversary, a 1,500-meter-long clandestine track was discovered in the Sucre canton , which was used to ship cocaine to Mexico . The foreigner is prosecuted for organized crime .

Among the evidence found that October 22 are almost USD 25,000 in cash, five pistols, a satellite phone and 446 kilos of cocaine .

Agents of the Anti-Narcotics Directorate observe that the shipment of drugs to that nation from illegal planes is frequent, especially in Manabí . That reflects official statistics on clandestine leads discovered.

That is why they warn about the presence of more emissaries who come to Ecuador .

Investigators know that representatives of the cartels began to arrive more frequently since 2009, although this phenomenon was already registered before, for example, with the late former military officer Telmo Castro . He was also linked to drug traffickers in Sinaloa .

According to the investigations, this time that group made a pact with Los Choneros . Official documents indicate that since 2017 the JNG emissaries also arrived and found an ally: Los Lagartos .

The gangs are fighting for control of the drug inside and outside the prisons.

The investigations show that the cartels use them to also provide all the logistics on the clandestine routes .

In addition, they endow them with weapons, money and technology. The task is to pass the cocaine produced in Colombia , by land, to the ports of Guayaquil, San Lorenzo-Esmeraldas and Manta-Manabí. From there, the next destinations are Central America , the US and Europe .

The officials in charge of the investigations say that JNG has begun a process of expansion in the region. The intention is to take advantage of the lack of leadership in Sinaloa, after the arrest and prosecution, in 2019, of its top leader, Joaquín ‘El Chapo’ Guzmán .

Agents warn that to win the drug routes from Colombia their emissaries seek more alliances. The Police say that is why in Ecuador the gangs compete for spaces to operate with the cartels.

The agents in charge of this case indicate that local networks seek to attract the attention of these mafias and emulate extreme ways of operating: behead their enemies, dismember them, burn them or hang them. That happened on Tuesday.

The Rehabilitation Service is concerned that 10 188 of the 39,000 inmates are in jail for crimes related to drug trafficking .

The entity says that most of them have alliances and are part of illegal networks.

Since 2016, people locked up for drugs are the main prison population.