Ecuador’s Marlon ‘Chito’ Vera beat Englishman Davey Grant in the undercard match at UFC Vegas 29 on Saturday, June 19, 2021. In the second and third rounds, Vera showed her potential in the octagon. Grant prevailed in the first round. The triumph of the tricolor was by a unanimous decision. 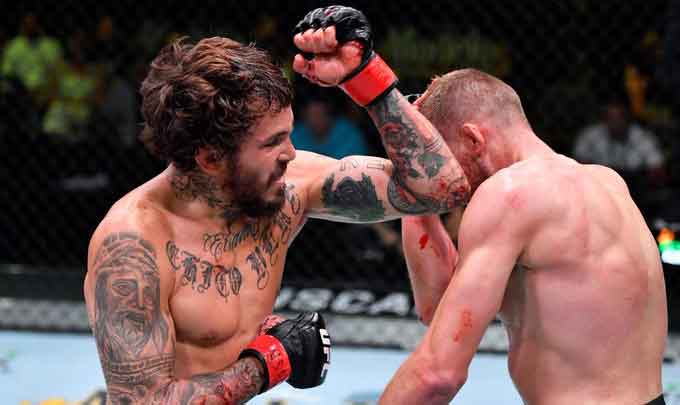 The Englishman, who debuted in 2008 and arrived in 2013 at the UFC, came out wearing a white jersey. Grant, who had already beaten ‘Chito’ Vera in 2016, was smiling. Vera, on the other hand, came out with the flag of Ecuador in her hand. He hugged his team before climbing into the octagon and going through the judges’ inspection. The manabita wore a yellow trousers and Grant a black one.

The first bout was one of analysis. Vera struck with her right foot repeatedly. The Englishman, on the other hand, tried to show his punches, but in the second round Vera struck accurately. In an elbow attack he opened a wound and the Englishman began to bleed. The manabita subdued and made itself felt. In the third round, the Ecuadorian again subdued Grant. On the floor he subdued his opponent, who resisted until the end.

With the win, Vera consolidates at 15th in the bantamweight rankings and her dream will be to face top-level fighters in the coming months. “I worked a lot for this. In the second round I started to get my hands out. I want to fight and I’m ready to go back to the gym on Tuesday,” he said with the flag on his shoulder. He even, excitedly, challenged former champion Dominick Cruz. It’s Vera’s first win of the year. ‘Chito’ has lost six fights. All were by decision of the judges. No opponent knocked him out or forced him to surrender.

On social networks multiplied the congratulations for the Ecuadorian who smiled again after what happened in December 2020 where he lost by decision of the judges,