Mayors enlist proyects for lands military will cede them 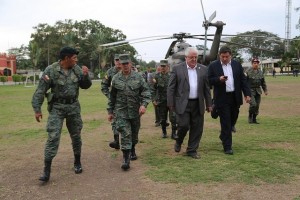 The Minister of National Defense, Architect Fernando Cordero, visited Huaquillas on October 6, to assess the military premises in the El Oro province.

Sports Complexes, social housing, ecological parks, fairgrounds, public libraries, museums, a cableway, transportation terminals and universities, would be some of the projects the local governments plan to build on the lands the military will deliver to the State.

As part of the process of military modernization, 603 acres that belonged to detachments installed within cities for public use shall be released. With this plan of the institution is expected to reduce military units from 561 to 264 and this will begin in El Oro, Azuay, Loja, Manabi and Pichincha.

The aim is to reduce costs and to place the military in strategic sectors. $ 219 million to transfer the enclosures.

For the Mayor of Santa Rosa Clemente Bravo (Santarroseño Movement RUF), the government’s decision “is correct.” He hopes that the Ministry transfers the land to build fairgrounds, ecological parks and the “University of Pedagogy,” this latter “is already approved by the state,” according to the Santa Rosa Mayor.