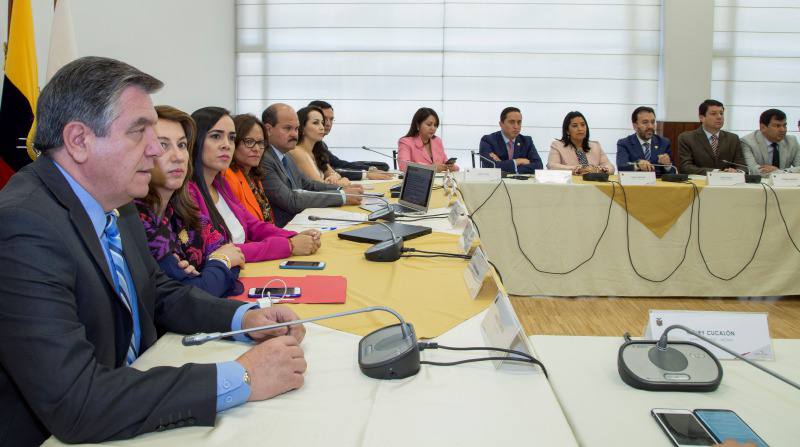 The National Assembly integrated the occasional border security commission that will be in charge of studying the bills that allow facing the security problem in the northern border.

This commission is made up of 19 legislators from different parties. Yesterday it was known that who will chair the commission will be Juan Carlos Yar (AP), representative of the province of Carchi.

However, before that integration, he denied a request to change the agenda proposed by the legislator Pedro Curichumbi (CREO), who proposed to approve a resolution to integrate an occasional commission to investigate possible links between the previous government and the guerrillas drug trafficking

That motion received the backing of 61 votes of the blocks of the PSC, BIN, CREO, SUMA; while 58 votes of AP and RC were against and others abstained. 70 votes were needed for it to happen.

Curichumbi said that the National Assembly has the supreme duty to investigate with wisdom, understanding and depth in relation to the statements of the President of the Republic, Lenin Moreno, who said that there may be possible links between the previous government and the guerrillas and drug trafficking, because In recent months, as never before, our country has been exposed to violence, the sale and trafficking of drugs, the death of the military, kidnapping and murder of journalists on the northern border. ”

Faced with this, recalled the Assemblyman, the chief executive at the March 28 meeting of the Public Security Council declared that the previous government is directly responsible for the dismantling of the Armed Forces and the Police, so that the irregular groups and the drug traffickers celebrate their terror party on the floor of Atahualpa y Espejo.

Curichumbi said that the Plenary decided to create a commission to investigate the case for six months, following allegations and accusations made by the President of the Republic, Lenin Moreno, and citizen groups that submit evidence.

Assemblyman Esteban Melo (RC) commented that this issue has been investigated several times and the Attorney General’s Office itself has carried out the investigations.

He said that pretending politically to use such a sensitive issue is totally deplorable, indicating the “baseness that can be managed in politics itself. The truth is that the government of Rafael Correa seized twice as many narcotic substances as previous governments and the US government itself congratulated the fight against drug trafficking that was carried out by the government of the citizen’s revolution.

The commission meets today to choose dignities and learn about a border project presented by René Yandún (BIN), which returns to the Armed Forces the responsibility of coordinating the public security system.

“We live critical moments because of the situation on the northern border. It is time to legislate so that not only at this time work for peace, but that it is permanent.” Lenín Plaza, legislator of Alianza PAIS. (I)