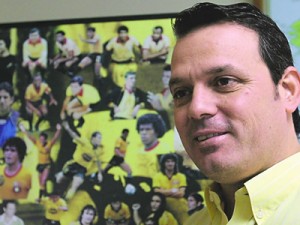 Yesterday Luis Noboa, candidate for Barcelona presidency, denied his relation with the promotion of the Ecuadorian striker, Edison Mendez. Noboa denied that this promotion is a ruse to speed up the elections on March.

The former Vice President of the yellow team stated that an administrative and economic audit should be the first thing the team must do.

Meanwhile the Barcelona’s coach stated that a player like Mendez would be a good acquisition, but the hirings end on March 30. Afterwards the current president of Barcelona, Alfonso Harb informed that Mendez is not on any hiring negotiations, and qualified such comments as “press speculations.” He also discarded that Omar Guerra could be another player for the yellow team.

Mendez would be 33 years old on February 20, he was scheduled to play for the Atletico Mineiro of Brazil, but he did not enter in the plans of the Brazilian coach Dorival Junior.