BREAKING NEWS
Mexico and Ecuador, a movie romance
Fake news, a deadly virus in Ecuador
Galapagos records four positive cases of covid-19
$ 60 coronavirus bonuses: Requirements to be benefited and how to collect government social assistance
Coronavirus in Ecuador: 443 tourists managed to leave Galapagos
Coronavirus disrupts the stock market
Companies in the country stop producing liquor and paint to generate alcohol and antibacterial gel
If the measures are followed, the curve would decrease in a month in Ecuador
Galapagos hoteliers can operate to accommodate tourists who stayed on the islands
Ecuador allows humanitarian flights

Two reverse auctions were made. The cases of corruption do not stop splashing Petroecuador, in purchases that would seem details in such a large entity. Under the tutelage of the then manager Marco Calvopiña, the state company acquired in June 2015, 464 pairs of gloves -for works in the Esmeraldas Refinery- at $ 141 each.

In the market they cost $ 58; There is a possible premium of 235%. This was determined by a special examination carried out by the General Comptroller’s Office of the contracts signed between the company Heflin SA and Petroecuador between January 2014 and August 2017.

In the audit it was determined that gloves type 9-022 Ansell Edmont brand, They were sold to the public company at $ 65,772, with an excess of $ 41,644. The negotiation process was carried out by the Zonal Chief of Purchases, Contracts and Imports of the Refinery, which did not verify the value of the market.

Calvopiña was sentenced to six years in prison for illicit association in October 2017, for signing complementary contracts that increased the repowering of the Esmeraldas Refinery. 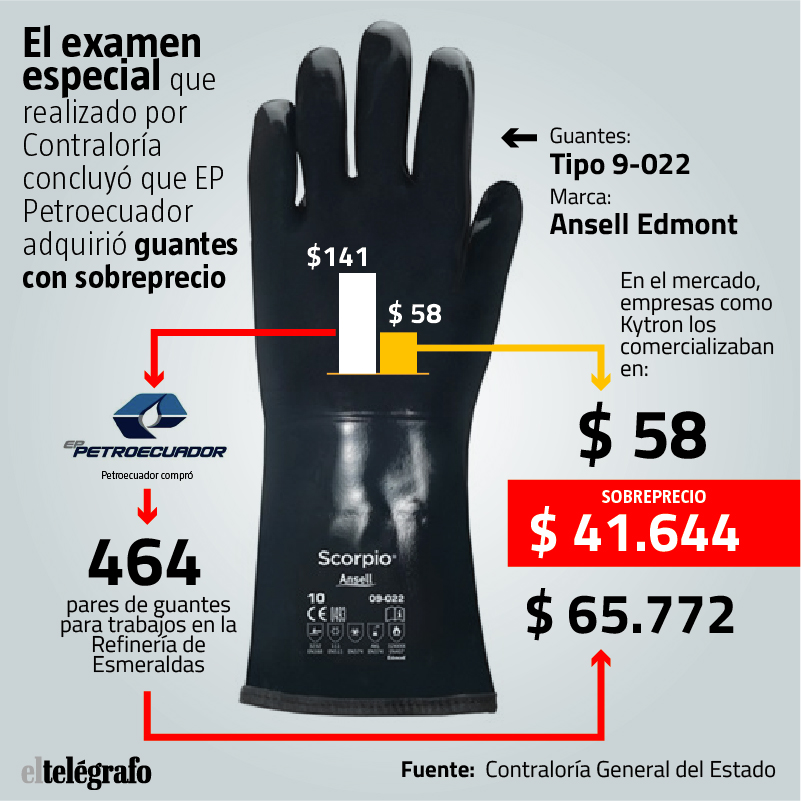 In January 2015, Petroecuador launched a purchase process to acquire 1,200 pairs of gloves. The referential value was $ 58 each pair, that is, the total purchase was going to be for $ 69,600. Then the contest was placed in the Public Purchases portal. In the first instance, three companies presented their offers: W.R.M.E ($ 57.90 each pair); K.G.N.L ($ 57.90) and Kytron ($ 58). The latter clarified that her gloves were from the Ansell Edmont brand. However, the then Zonal Chief of Purchases, Contracts and Imports Noroccidente of the Refinery, in March 2015, canceled the reverse auction of the contract with the objective of “improving the technical specifications” of the offers.

During the special examination, the Comptroller did not find the criteria of “how the individual value of these work implements was established that maintain the same code of the article that was included in the first process”.

Discarded the first three and the last one was qualified. “It complies with what was requested in the specifications,” he said. In the proposal, Heflin S.A. He specified that the unit price of the 464 pairs of gloves was $ 148.

They were the same as Kytron offered, at $ 58, in the first auction. Because the Technical Commission stated that “there is only one qualified offer”, a 5.5% reduction in the price proposed by Heflin S.A. That meant that each pair of gloves cost $ 148 to $ 141. The contract was signed on June 22, 2015.

The Comptroller concluded that the negotiation was made without considering that the price of the same in the market was $ 58. To investigate the increase in the offer, the Audit team of the Comptroller’s Office requested other companies related to the distribution of these materials to inform if Heflin SA is an authorized distributor for the commercialization of gloves.

There it was revealed that the company did not have that faculty. For example, Ansell reported that Heflin S.A is not an authorized distributor in the country; On the other hand, Global’s Distributor reported that Heflin S.A. Proaño Representaciones also acknowledged that he does not have Heflin S.A. as a client, Vepamil explained that he did not sell gloves – in that year – to the winning company of the contest.

The company said that the gloves had a cost of $ 34.77 on the market. Web portals describe Heflin S.A. as a company that is dedicated to the “wholesale of valves and electronic tubes, semiconductor devices, microchips, integrated circuits and printing.” Comptroller asked for explanations from the company, but so far has not received a response.

Newspaper El Telegrafo communicated with Heflin S.A. and it was indicated that at the moment there is no answer because “the owner of the company is traveling”. Meanwhile, Pablo Encalada, Calvopiña’s lawyer, said he has no information about the special exam.

Through a statement was informed about the replacement of the manager general of Petroecuador. “After a meeting held today, July 10, 2018, the Board of EP Petroecuador commissioned the General Management of the public company, Ing. Marcelo Proaño, who was the current Transportation Manager,” the entity said in a statement issued by the company Last Tuesday, on your Twitter account. Right there, it was reported that Proaño is a career officer in Petroecuador “with a broad trajectory in the sector”.

In the government of Lenin Moreno three people have passed for the general management of Petroecuador, the largest public company in the country. First it was Byron Ojeda, who resigned for personal reasons.

He was replaced by Carlos Tejada, who also leaves the post due to particular issues, Petroecuador reported in the press release. He was in charge for 10 months. In the middle of this change of directive, the company called for Thursday, July 12 to the media to witness the opening of envelopes for the export of 3.9 million barrels of crude oil. (I)