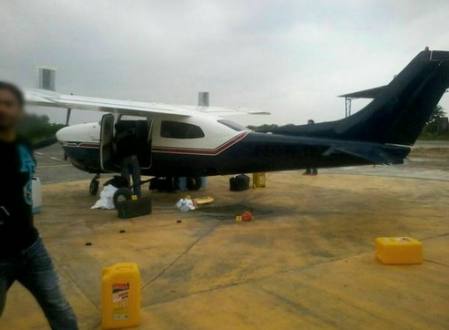 The Ecuadorian Police seized 350 kilos of cocaine and arrested 12 people, including two Colombians and two Mexicans.

The operation was performed this Sunday at La Clementina farm, located in Babahoyo (LosRíos), which was seized in 2013 by the Internal Revenue Service (SRI by Its Spanish acronym).

The Police was informed about the arrival of a plane charged of  the alkaloid by a citizen complaint, which stated that it would land in La Clementina farm.

The Interior Ministry explained in its Twitter account that the operation left: “12 detained citizens: 2 Mexicans, two Colombians and 7 Ecuadorians, including a policeman, for alleged drug trafficking.” One plane, two trucks and 350 kilos of cocaine were also seized.

A Ministry source told AFP that there are still no details about the destination of the drug.

After the property was seized in 2013, it was acquired by  around 1,900 workers who created the Cooperative of Production and Commercialzation Clementina (Cooproclem for its Spanish acronym).

Affiliation of domestic workers rises a 19.5% in Guayaquil