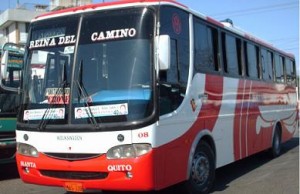 The conciliation hearing between representatives of Reina del Camino cooperative and officials of the National Transit Commission—held in Guayaquil—ended without results this morning as the judge of Children and Adolescents, Francisco Hurtares, has called for further testing.

Jorge Zavala, the cooperative’s attorney, said the bus line would continue operating normally due to lack of arguments to sustain the suspension.

“For eight days, as provided by law, there is no disability and nothing has changed. I am asking for evidence, to make a decision,” said the Judge in Public Radio. After the time allowed by the judge, there will be a new hearing.

The Attorney of the National Transit Commission, affirms that the cooperative should be punished.

Peninsula Drug Lab Seized Near a Military Base