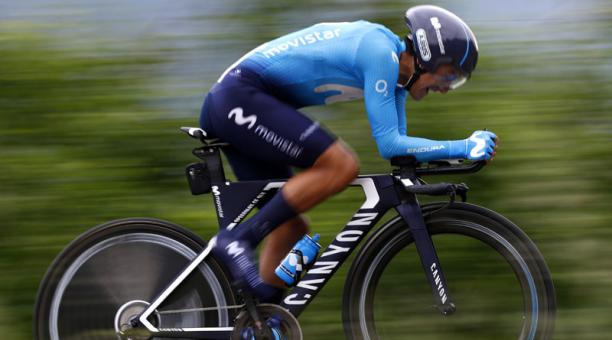 The Ecuadorian Richard Carapaz plans to undergo medical and physical exams in Spain, before embarking on his return to Ecuador. His team, the Movistar Team, will also evaluate his campaign and rearm your competition agenda for the remainder of the year.

Expectations in the carchense – which tomorrow (May 29, 2018) will turn 25 years – changed after his performance in the Giro d’Italia, where yesterday (May 27, 2018) finished fourth, 5 minutes and 44 seconds of the experienced champion Chris Froome.

For the first time, a tricolor intervened in this international fight. During these three weeks of competition, one of the three most prestigious races in the world (the others are the Tour de France and the Tour of Spain), he jumped into the cycling elite.

He won the 8th stage and, on eight occasions, he wore the white ‘maglia’ (destined for the best young man, for which runners under 26 years old fought). He started as ‘gregarious’ and ended up as the ‘boss’ of his team.

“At first, I did not know what calendar I would have, because with this everything has changed a little. I will wait for the plan of my team to plan it in the best way, “said the cyclist excited after the test yesterday.

Of course, his great challenge is to run, on occasion, the Tour de France. This is indicated by his close friends, such as Jorge Montenegro, his countryman in charge of his cycling school in Tulcán. There, the Municipality prepares celebrations for him.

He will also be honored by Movistar, in the country. The Tour will be on July 7, while the Tour of Spain will be on August 25. For the ex-cyclist Pedro Rodríguez, to ‘Richie’ his team should take him to the Vuelta a España, but “as someone who collaborates for the leader”.

He considers that it would be quick to include him in the French Tour, a race that he believes could be fulfilled in the next few years, in order to gain greater prominence. “In the Vuelta a España, I could go to collaborate and seek to win mountain prizes. For the Tour it is early, since he has leader conditions and would need to work for him during the race “, explains the ‘Eagle’.

For Paulo ‘Bruja’ Caicedo, Carapaz has demonstrated his conditions of great climber and should continue in that line in the future. This was demonstrated in the 8th stage of the Giro, between Praia a Mare and Montevergine de Marcogliano, of 208 kilometers, when he triumphed after a great attack in the rain, with just over 1 kilometer to go. He overtook the Dutchman Koen Bouwman, who was progressing in his ‘flight’ and who reached the finish line to start his career in the pink race.

It was considered the revelation of the race and fought until the end for the white ‘maglia’ against the Colombian Miguel Lopez. His performances in the toughest climbs, made based on maximum commitment and tenacity, were highlighted by Oswaldo Hidalgo, president of the Ecuadorian Cycling Federation.

“It is a feat that Richard has achieved,” said the leader. Before his departure yesterday in Rome, the consul Saúl Pacurucu handed a plaque to the athlete, amid shouts of support from Ecuadorians in the European country.

“Being able to run this Tour and finish in the ‘top 5’ overwhelms me with joy. I distrusted a little of myself and now I believe it more, “said the tricolor, who on the eve of the test had pain in a knee that made him fear of his participation. (I)