Ringleader of attack against U.S. consulate is captured in Libya 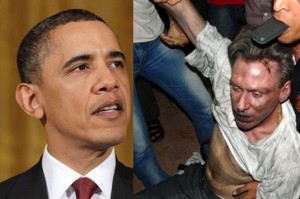 The capture of Ahmed Abu Khattala in Libya, alleged ringleader of the attack on the U.S. consulate in Benghazi in September 2012, where four Americans were killed, including Ambassador Chris Stevens, was confirmed yesterday by the Pentagon.

Khattala was arrested on Sunday during a secret U.S. special forces operation and yesterday he was in “a safe place,” outside Libya and would be tranferred to the U.S. soon, according to the Pentagon.

The Pentagon Press Secretary, Admiral John Kirby, said that without a single fired bullet and without any casualties during the operation, all Americans who participated in the assault are already out of Libya.

“With this operation, the U.S. has once again demonstrated that we will always do whatever is necessary to ensure that justice is done when people harm Americans,” said Barack Obama, U.S. president