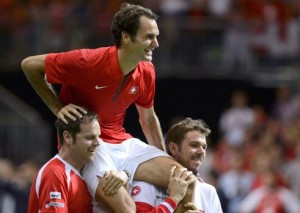 Roger Federer yesterday led to Switzerland to the final of the Davis Cup for the first time since 1992 by achieving third point of the semifinal against Italy in Geneva.

The tennis player, 33, considered by many as the best in tennis history, will play the first Davis Cup final of his successful career in which holds the record of 17 Grand Slam titles.

Federer, former world number one, won 6-2, 6-3, 7-6 (7-4) for the best Italian player Fabio Fognini, who could not prevent the Swiss live a day to remember before its audience on the fast track and roofed Palaexpo.

Switzerland will play for the Davis Cup, from 21 to 23 November, in France, country that last Saturday in Paris closed its series to achieve in the doubles match 3-0 against the Czech Republic.