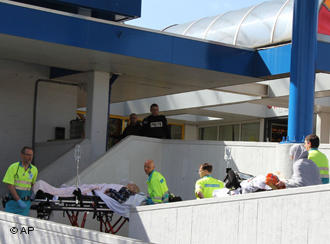 Six people were killed in a shooting at a mall in Alphen aan den Rijn (west of Holland) and at least 13 were injured when a man opened fire in the “Ridderhof” shopping center, located at the Dutch town of Alphen aan den Rijn (with 72 000 inhabitants, 46 kilometers from south of Amsterdam) at around 12:00 (10:00 GMT 05:00 in Ecuador).
“A man with an automatic gun, whose identity hasn’t been revealed, began shooting, killing five people and then himself,” Mayor Bas Eenhoorn told reporters. Eenhoorn said the firefight also left four “seriously wounded” and at least seven people were slightly injured.

Witnesses interviewed by various media indicated that it was a blond man in his 20’s. Police immediately evacuated the mall due to the rumor that the shooter was not alone.

“It’s unbelievable that such a catastrophe has occurred in our city in a beautiful day,” Eenhoorn said, he also presented his condolences to the families of the victims.

The Divorce of Alvaro Colom was Authorized by Guatemalan Judge