The ballots for the 2021 elections take shape. Two weeks after the closing of the registration of candidacies, the National Electoral Council ( CNE ) continues with the qualification of the lists . 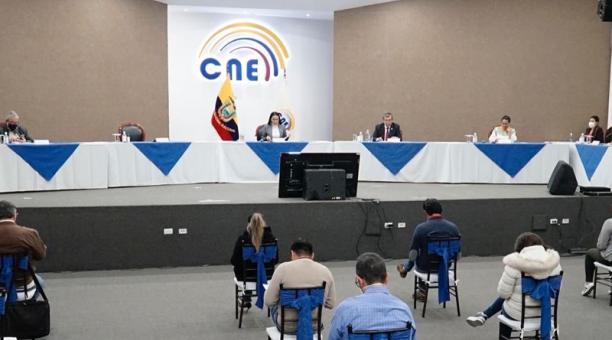 This stage has been marked by errors in the entry of documents, attempts to register citizens prosecuted by the courts and objections presented by political organizations .

For now, the revision of the presidential binomials shows greater progress, compared to the lists of national assembly members and Andean parliamentarians . The validation of these dignities is in charge of the Plenary of the CNE.

Of the 17 presidential pairs that entered documentation, 12 have already been qualified, but only six are firmly registered. That is, the Contentious Electoral Tribunal ( TCE ) certified that they have no appeals and their positions on the ballot papers are insured. The figure represents 35.3% of the formulas that aspire to reach Carondelet in 2021.

Currently there are three pairs that have a correction period. On Sunday night, October 18, the TCE denied the appeal filed by the Now movement, against the resolution that allowed the Union for Hope ( Unes ) alliance to replace Rafael Correa as the country’s vice presidential candidate. Instead, the journalist Carlos Rabascall , who seeks to participate in the February 2021 elections, was registered . For now, his application is still in process. With this opinion, the National Electoral Council ( CNE ) can continue with the qualification process of the correista binomial.

The previous week Unes adherents staged sit – ins outside of the Court, to get that “guarantee” their right to participate.

Michael Aulestia , a candidate for Assemblyman Pichincha and director now drives the resource. He assures that Unes entered writings in the TCE, arguing that Now it has no competence to object to the resolution , since it is a provincial movement.

Aulestia insists that the CNE made a wrong interpretation of the norm, since Correa did not accept his nomination in person and, therefore, the change for Rabascall should not have been authorized.

Enrique Lesscal , director of the Democratic Center , part of Unes, considers that the appeal will be rejected. He believes that a judgment of the first instance of the TCE, in relation to the “inapplicability” of the very personal acceptance of the pre-candidacies , would pave the way for their registration.

TCE was issued yesterday, at 18:00, the court ruling on the appeal to the formula Arauz-Rabascall.

As the correísta binomial was challenged by the movement Ecuadorian Kingdom, Unes also responded with objections. The coalition entered 20 resources of this type, according to data from the Unes attorney, Santiago Díaz .
Of them, 15 against aspiring national assembly members, one against a provincial assembly member and four against binomials.

This includes the processes against Guillermo Lasso and Alfredo Borrero , for alleged links with tax havens. But they were dismissed by the CNE and the TCE.

Unes also objected to the aspirants of Libertad es Pueblo, for not having been designated in primaries. Finally, the pairing of Juan Carlos Machuca and Cristóbal Luna was inadmissible for registration.

As for the 18 lists of national assembly members , only three have been qualified: Unidad Popular, Izquierda Democrática and the alliance Socialist Party-Concertación.

In the case of multi-person dignities , the CNE does not qualify the payroll if one of the candidates registers disabilities or does not meet the requirements.
Here, Unes objected – for owing alimony – to Salvador Quishpe , who heads the list of assembly members of Pachakutik (PK).

Marlon Santi , PK coordinator, said they will appeal to the TCE. He assures that they have documents on an agreement that Quishpe would have had, but that was not reflected in the pension system.

Fernando Balda and Marco Rosales , from Libertad es Pueblo, were also challenged for the same reason. “They try to prevent the qualification by playing the game of correísmo,” said Balda.

Unes must also make replacements . Lesscal confirmed that in the next few hours the replacement of Pablo Romero , former head of intelligence of Correismo and sentenced for the kidnapping of Balda, who was inadmissible on the list of national assemblymen, will be registered for not accepting his candidacy .

Other defendants, such as former President Abdalá Bucaram and Daniel Salcedo, were also denied registration, and Fuerza Ecuador (FE) must replace them on their respective lists. That group changed its presidential binomial, as part of the correction. They entered the documentation to try to register Carlos Sagnay and Narda Ortiz.

While for the Andean Parliament there are only four qualified lists, out of 17 that requested registration.

The Minister José Cabrera said they hope to conclude as soon as possible qualification, so that citizens can already begin to think their vote.