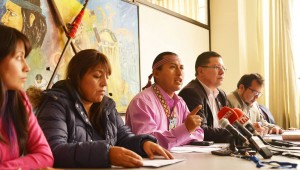 The association of workers and indigenous peoples announced a new mobilization for next November 11 given the lack of answers from the government to file the proposed constitutional amendments of the ruling party, including reelection.

But before this mobilization, Severino Sharupi, leader of the Confederation of Indigenous Nationalities (CONAIE), said that there will be preparatory workshops as a forum scheduled for October 12 in Quito, where the economic problems of the country will be discussed, and another meeting on the 16th in Guayaquil, in which agrarian reforms will be discussed.

IMF estimates that Ecuador will not grow this year