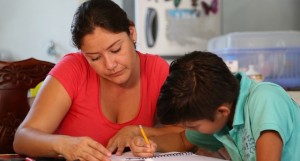 It was during President Rafael Correa´s weekly address, where he announced that Tania Arevalo Corbeñaz obtained a 1000, the maximum score on the tests of the National Exam for Higher Education (ENES).

Arevalo, 24, lives in Machala with her mother, sister, husband and 9 year old son in the San Estuardo neighborhood. On Wednesday she traveled to Quito to meet with SENESCYT authorities to check higher education options. She is willing to change her residence, if required by her studies, but she only asks help to move with her husband and son.

Tania’s life has not been easy, her mother emigrated to Spain when she was 14, under the care of her older sister. At 15, she got pregnant while attending the tenth year Having no support for raising the baby, she left school. In 2010 she resumed her studies and in March she took the ENES test.