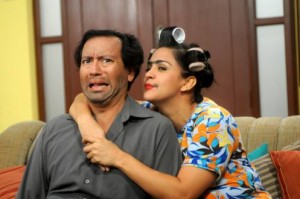 Teleamazonas TV offered public apologies “to the community of diverse sexual orientation”, by a chapter of the ‘Happy Couple’ tv show.

Teleamazonas TV offered public apologies “to the community of diverse sexual orientation,” fulfilling the decision of the Superintendent of Information and Communication (Supercom by its Spanish acronym) by a chapter of the ‘Happy Couple’ tv show, aired on January 2, 2014, whose contents were considered “discriminatory” by the agency.

The general manager of the channel, Sebastian Corral, issued a statement where he points out: “There was no intention from Teleamazonas to offend anyone, as the aforementioned program is a comedy with characters who make distinctions between individuals, groups or collectives.

He adds that ‘The Happy Couple’ “is an Ecuadorian artistic production, of the humorous and ironic genre, that has ever expressed a message that has the aim or purpose of impairing the rights of some people. If that had happened, Teleamazonas regrets what happened and presents a public apology”.

The Supercom determined by its resolution of October 2, in which such episode violates Article 62 of the Organic Law of Communication (LOC),  so it established that Teleamazonas should offer “a public apology to the community of different sexual orientation as a sanction, within 72 hours, counting from the notification of the decision” and within the same space. Likewise, it should be published on the website of the TV channel.