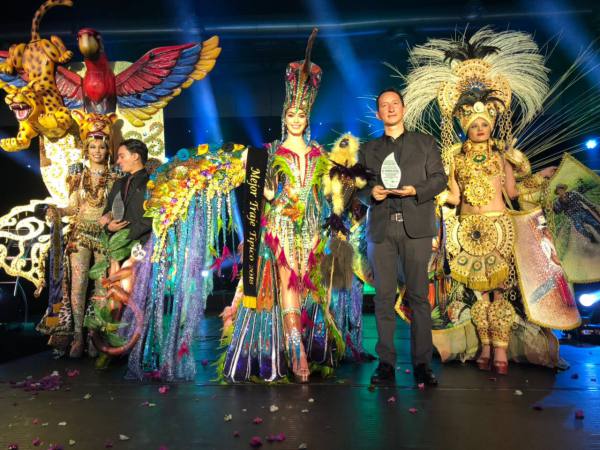 “Ecuador in its purest state” is the name of the best typical costume of Miss Ecuador 2018, chosen tonight at the Convention Center of Guayaquil.

The design, which belongs to the Manabita Wenceslao Muñoz, who for the fifth time wins this designation and is inspired by the four regions of the country. This was carried by Virginia Limongi Silva, candidate of the canton Portoviejo.

The chosen suit will be worn by the winner of the. Miss Ecuador contest in the Miss Universe 2018 international contest. “The show, the quality, the Wow!, the material used, I think it has everything to give something to talk about in the Miss Universe”, highlighted Muñoz regarding the winning design.

The second place of this competition, and which will be worn in Miss International, went to Manolo Loor, with “Diosa del Agro”; while the third place was for “Earth and Magic”, carried by Alisson Matamoros, which will carry the Miss Supranational Ecuador in the international competition.

According to María del Carmen de Aguayo, director of the contest, for the selection of the sketches was taken into account, in addition to the design, the cultural aspect of the same, which was even supported by each designer in a previous presentation. “It is a sum of elements that gives the result of the qualification,” she says.

Before the election, the 22 candidates paraded in evening dress by the footbridge of the place, which was attended, among others, by the Queen of Guayaquil, Sonia Luna; the Miss Continentes Unidos Ecuador 2017, Bianca Benavides, and Francesca Cipriani and Connie Jiménez, Miss Ecuador 2015 and 2016 respectively. The final gala of Miss Ecuador will be held on May 5 in the city of Machala, province of El Oro. (E)

Six months to delimit the intangible zone of Yasuní