The floating gardens, a 50% relief to pollution 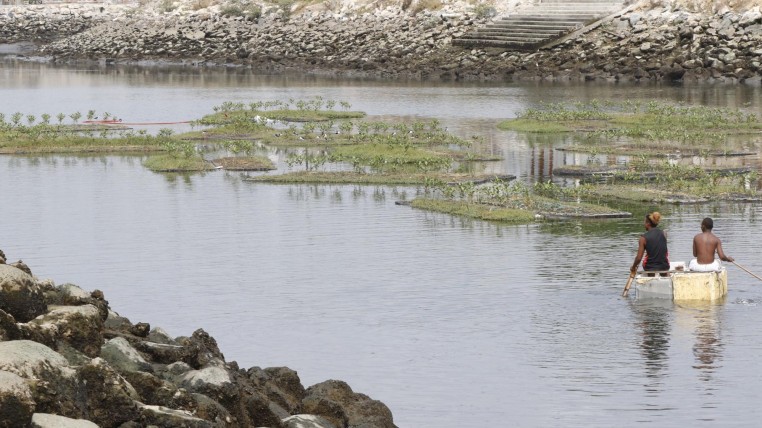 In the formal, they are part of a recovery formula of a branch of the estuary. From the aesthetic, they are presented as gardens anchored in the middle of the water, an additional attraction in a neighborhood that in recent years was forced to revise the way of living together with this arm of the sea.

The floating plant islands that the Ecuadorian Ministry of Environment (MAE) placed in the Palanqueado estuary six months ago already show positive results.

Of this they give account the neighbors of the estuary. “The boys say that the crabs have reappeared and there is more variety of fish,” says Alfredo León, president of the Nuevo Amanecer neighborhood council, which groups 2,424 homes in a sector located in the heart of the western suburb.

Floating Island International was hired to design and manage this system that has been tested in other parts of the world a work that ended after six months. “We have finished in a good way the contractual relationship with this company,” said Nelson Zambrano, undersecretary of Marine and Coastal Management of the MAE Ministry.

At the end of the contract, the company delivered the evaluation reports. The technical results scientifically support what neighbors show in these days. Since the placement of the floating panels (there are 40, in each one there were 90 types of aquatic plants of various species), the turbidity of the water decreased up to 50%.

To this is added the 50% reduction of nitrogen and phosphorus, which in water bodies such as the Salado, generates a high and excessive growth of algae and marine plants, which destabilize the ecosystems. It also presents a 50% decrease in biochemical oxygen demand, due to the control related to wastewater discharges.

“This was achieved thanks to the coordination with Interagua and Ecapag. The number of houses that directly and indirectly discharged sewage was reduced by 99%, “said Zambrano. For the next six months, the administration and maintenance of the islands will be in charge of the MAE personnel. “After six months, with a new evaluation of results, the decision will be reviewed if the islands continue in the place or are transferred to another branch of the estuary,” said Zambrano. There is a possibility that the community will assume the administration. León, from one of the two organized neighborhood councils surrounding Palanqueado, considers that that would be an option. “The islands are also an attraction for visitors to the neighborhood.”

The parts of a process

Of 882 homes of families that discharged directly and indirectly to the estuary, only 32. There were closed 110 septic tanks. A work executed by Interagua and Ecapag.

The bioremediation process uses two species of plants: red mangrove and water lilies. Additionally it has two aerators powered by two bombs. (I)