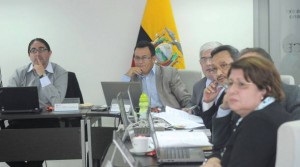 Between October and November, universities and polytechnic schools will apply the comprehensive test to students who have not yet qualified and completed their credits until November 21, 2008.

Jorge Ortiz, Academic Director of the Central University of Ecuador, explained that this test will have two components: generic content, which will be allocated between 10% and 30%, and professional content, which may occupy up to 90%.

“Teachers should develop a bank of 100 questions based on the career, but we believe the exam should have 60”, he said. The exam, he said, shall be taken on November 14. The qualification would be made on December, and re-qualification and certification in January 2015.

The authorities indicate it would exist a “test-out”, for those who do not pass the exam. This would be held in March 2015.

In the National Polytechnic School, authorities have begun to call for students to register in the site http://fca.epn.edu.ec/. The tests will be in November.