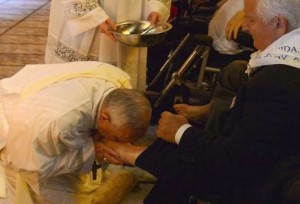 The Pope Francis met this Holy Thursday with the foot washing ritual to twelve disabled people, including a Libyan Muslim boy in a ceremony at a church in a suburb of Rome.

The Pontiff, who had great difficulty to kneel down and getting up from the white cushion he was resting on, poured water, dried and then kissed the feet of each of the twelve chosen.

“The legacy that Jesus left us is to be servants to one another,” said Francisco at  the start of the ceremony, which was accompanied by simple chants in Italian.

He noted that washing the feet is a symbolic gesture, “because they were slaves, servants, who managed to wash the feet of the guests, because at then, the roads were of dust and when they came to a house, it was necessary to wash the feet”, he explained.