2,500 tubes for the Pacific Refinery arrive to Manta 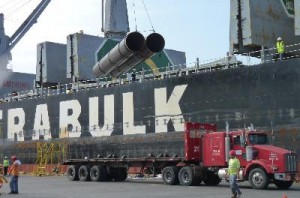 The first 2,500 tubes from a total of 7,800 landed in the Port of Manta,  this will be part of the aqueduct that will carry water to the Pacific Refinery and will provide this service to the canton.

The steel pipes came from China, which weighed 10 tons. The second shipment will arrive in late July and a third in August.

According to the manager of the Pacific Refinery, Bismarck Andrade, the work began on December 24, 2013, when the advance payment was delivered to the Obedretch company.