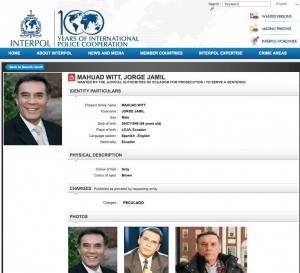 The Red Notice issued by Interpol for the detention of Former President Jamil Mahuad was temporarily removed from the web site of the International Police, while positions are analyzed.

The announcement came after Patricio Vivanco, Mahuad´s Lawyer, said on Tuesday that his client was no longer on that list.

The Commission for the Control of Interpol´s Files (CCF), an autonomous and independent  Interpol agency, performs the statutory audit of the information provided by the defense of the Former President, who was sentenced by the National Court of Justice of Ecuador (CNJ by its Spanish acronym), for the crime of embezzlement.

The Ministry of Internal Affairs will submitt again all the update documentationto the Commission, including the judgment of the National Court of Justice on May 29, 2014.