As of December 26 next, in 23 streets of the southwest of Guayaquil the 38 puppets between 3 and 10 meters high will be exhibited, which this year are part of the Route of the Giants 2019. 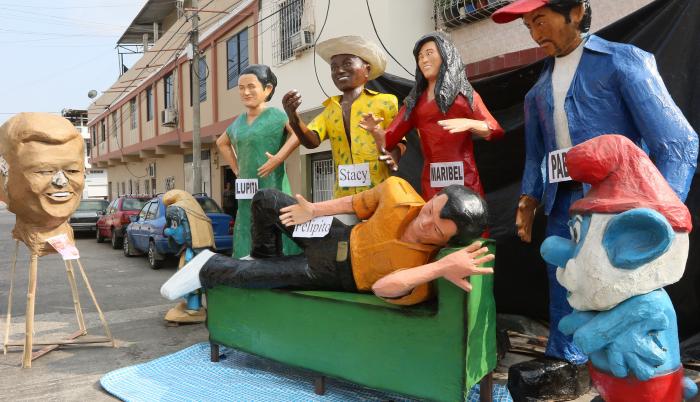 Today was the official launch. And during the activity, which takes place for the fifth consecutive year, the artisans, who were present in the Municipality of Guayaquil, where the event took place, gave details of the creations they have made and are distributed in three parishes in the city.

Among them, Febres Cordero and Letamendi. The route is located, as every year, in the south and southwest of the city and is comprised of 2 circuits. The first, which runs through the streets of Ayacucho, Huancavilca, Captain Najera, Medardo Ángel Silva, Febres Cordero, Pedro Pablo Gómez, Alcedo, Brazil, Gómez Rendón, San Martín, Argentina, Venezuela, Gallegos Larra, Maldonado, Guerrero Valenzuela, Calicuchima, Francisco by Marcos, Leonidas Plaza and Asisclo Garay. And the second, the streets Christopher Columbus, Francisco Segura and Domingo Savio.

For Gloria Gallardo, director of the Municipal Public Company, an entity that has included this day in her calendar of festivities, the route moves commerce, gastronomy, entertainment and fun.

“Through the dolls, the whole sector is reactivated. And that allows us to generate more jobs. Now families have more options to enjoy. It is so healthy and traditional, it accommodates the whole family, ”said Gallardo, who said – like the previous editions – the dolls will not burn. They will only be dismantled.

Among the figures that will be exhibited between December 26 and January 11 are the characters of The Crazy Adams, Toy Story, Aliens, Frozen, Avengers, King Kong and My adorable trained; whose characters made of paper and cardboard were exhibited in the Plaza de la Administracion so that passers-by have an idea of ​​what they will see within the next few days.

Galapagos is released from 9,600 used tires