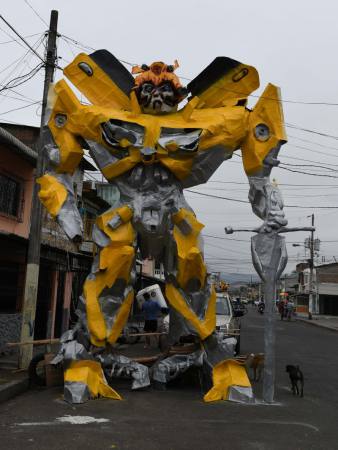 Jonathan Barzola and Eddie Rodríguez worked with rubber and cardboard in the final part of the Giga Bowser giant year-old elaboration. They gave form to a ladder that will ascend to the visits by the arm towards the hand of the giant.

There will be the site of the photographs. “So far we are at 90%, we need to assemble the shell and waterproof it just in case the rains,” said Barzola, one of the creators. Like them, another 40 artisans belonging to the Ruta de los Monigotes Gigantes, promoted by the Tourism Company, polish the details to expose them. In parallel, on 6 de Marzo Street, merchants increase the sale of puppets. The creators of giants, mostly, will begin to exhibit them from December 24, although some old years are ready, such as the Barcelona team in Brazil and 20. On a platform installed on a bus, the eleven yellow players are photographed by the fans. Its creators, Mauro Pinargote and Julio Caballero, will install lights to enhance the puppets. Another of the clever old years is that of the Flintstones, created by Carlos Zapata, in Medardo Angel Silva and the 15. Last Wednesday, Zapata painted several of the members of the family for his exhibition until January 14, when the old years will be dismantled.

This year they will not be burned by municipal order. Artisans like Zapata have invested $ 700 for their visitors who already deposit the contribution to the artisans. In the giant of the Ghostbusters located in Alcedo and 15, Richard Carpio planned to finish painting the tires of the car and install the four characters of the American film. Also, Mauricio Figueroa, creator of Maui, intends to accommodate an enclosure and install more characters from the movie Moana.

“People are now thinking about Christmas, after that they start to come with everything,” commented Yuri Mendoza, creator of Stich, in 16th and Capitán Nájera.

Other artisans think about how to attract more visitors. One of those is Franklin Pérez, creator of the Bumbelee Transformer, located in Brazil and the 9th. He plans to screen Transformers films on January 14. (I)