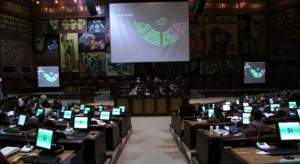 Eight of the 23 laws Alianza PAIS (AP) established in its calendar for 2014 were approved by the Assembly that year, in addition to other not planned as the Law on Production Incentives and Tax Fraud Prevention.

The laws of Equality Councils, Corporate Sector and Capital Markets, Debtors of Good Will, Telecommunications, Reform to the Act of Transportation, Traffic and Road Safety, Water Resources, Public Service of Electric Power and the Monetary and Financial Code are the eight laws that were approved and were planned for 2014.

Off the agenda was also approved the one for Social Security Funds, the Amendment to the Public Safety Act, Constitutive of the Iniap, reformatory to the Law on Personal of the Armed Forces (Armed Forces), the Tax Incentives and Fiscal Fraud Prevention Act.